I've been stuck using a Windows 8.1 box but that is end of life soon. I plan to install Linux on it. I've read some on various forums, including here, about various flavors of Linux. I'm thinking of Debian and Mint but am open to anything.

I've been using computers for a long time. My favorite OS was always OS/2 (which I still use.) I wrote in Basic, Fortran and APL decades ago. I'm not afraid of the command line, editing ini files, doing manual installations, using wildly different desktops, modifying settings, etc. etc. I detest Windows and Mac because of the training wheels and guard rails treatment of users, not to mention the spyware aspect.

In choosing which to install, it seems to me the most important thing is to make sure the hardware in my box is supported. Does that make sense?

BIOS American Megatrends Inc. P11-A4, 04/26/16 | SMBIOS Version 2.8 | BIOS Mode UEFI
A 2020 BIOS update is available but I saw lots of users bricked their computers with this and Acer didn't help them at all.

Soon to be a new SDD

Qualcomm Atheros AR956x Wireless Network Adapter
IEEE 802.11b/g/n
This box isn't near the router, so it will need to communicate with the router via WiFi. As a last resort I could move it to another room and connect to the router via cable, but I don't really want to do that.

Does anything look unusual, or will it be hard to find drivers in most Linux distributions?

That should be just fine. The easiest way to tell is to just boot to a live USB and see if the hardware works. It won't break anything unless you tell it to.
Hey, how long have you been using Linux? Please see the poll (and vote) at this link.
Learn how to ask a good support question.
I have decided to offer inexpensive Linux-based web hosting.
E

Thanks. Will report back after hardware arrives.

G'day "Junior" (you are 13 days my junior ) and welcome to linux.org, from DownUnder.

RAM is not an issue here, so any Linux will run on that baby. Mint and Debian are solid choices, Debian has a little more of a learning curve, but you may not worry about that.

SSD - size? And is it in addition to, or to replace, the 1 TB SATA HDD? I suggest the former if possible. Provides more options.

MORE ON DISTROS - Make DistroWatch your friend, and its Page Hit Popularity (tab near top far right) gives an idea of popular distros. Top 50 or so will have good support.

MX-19 (Debian-based), Linux Lite (Ubuntu-based), and Manjaro (Arch-based) are all worth a look. I run 70 Linux on this rig so have an opinion on lots of them.

TIMESHIFT - is a system restore application, better than Windows Restore, more flexible, and comes installed with Linux Mint, Linux Lite and some Manjaro.

and this from Linux Lite Help Manual, and MX-Linux

or read about it and ask questions at my Thread here

or other and it will be in first few entries, look for suggestions that include Linux.

@KGIII has mentioned testing for driver availability. Many of the drivers you may need are already written into and supported by, the Linux Kernel. If not, they can be added by various means.

Use the Live environment to check eg your printer/s, graphics, audio, wifi &c and anything that works live should translate after an install.

You may choose to use Rufus from Windows, or else there are solutions you may later use in Linux, some of which are cross-platform, such as

for burning the isos.

Any questions, fire away.

THOUGHTS FOR JANUARY 2021 1. COVID SUX -Stay safe and observe the rules 2. ON AV - nothing is bulletproof, but i wear kevlar - i use linux. 3. Still Beer o'clock where I live . Come and have a sing-along at Rock Roxx
E

Thanks! I think this box only permits one hard drive. I haven't opened it up yet to look, and the info isn't in the manual. I have no interest in remaining with Windows, so I'm going to remove the Windows drive and replace it with a new drive. I understand the principle of having the system and swap on a different drive than data, but I'm sure this will be so much faster than Win 8.1 it won't bother me to have just one drive. I haven't come close to filling the 1TB drive but I'm getting a 2TB.

I've been using Stardock Systems Open Office through Libre Office for years. I already moved my data files to peripheral FAT32 drives. I'll refresh them when I'm about to make the transition, then copy the data back to the HD in the box.

If you want to run Debian I recommend The Debian Administrators Handbook: 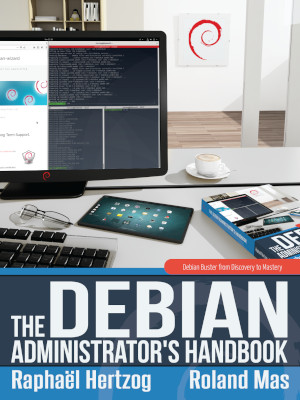 Written by two Debian developers — Raphaël Hertzog and Roland Mas — the Debian Administrator's Handbook started as a translation of their French best-seller known as Cahier de l'admin Debian (published by Eyrolles). It's a fantastic resource for all users of a Debian-based distribution...


Index of /images/unofficial/non-free/images-including-firmware/current-live/amd64/iso-hybrid
If it isn't broke don't fix it. If you can't fix it don't break it. You reap what you tweak.

You are already in good hands with the two members above

Your internal hard drive....1TB......you can buy a relatively inexpensive crade/enclosure and mount it Externally (if you need the room, which is, i guess, unlikely at the moment.

I can tell you now. The increase in speed will at first frighten you.
Last edited: Friday at 1:05 AM
Condobloke ...Outback Australian :: fed up with Windows antics...??....LINUX IS THE ANSWER....I USE LINUX MINT 20.1 EXCLUSIVELY.
Linux is user friendly....just very picky about who its friends are...

“A man travels the world in search of what he needs and returns home to find it."

It has been said that time heals all wounds. I don't agree. The wounds remain. Time - the mind, protecting its sanity - covers them with some scar tissue and the pain lessens, but it is never gone. Rose Kennedy

Here's the PDF if you want to download it:-

Like I was telling another new user last night, grab a series of distros, run them in Virtualbox, and play with them to see how each one works. Then just install the one that works the most for you.

e-flat minor 853 said:
I understand the principle of having the system and swap on a different drive than data, but I'm sure this will be so much faster than Win 8.1 it won't bother me to have just one drive.
Click to expand...

I was more thinking of Timeshift, which application's snapshots are best stored on a separate drive. Then if a drive fails, or a Distro is borked, you can easily restore it from where it is stored off drive.

The choices are of course yours, but if your budget and your skill set are up to it, I would be inclined to try Brian's @Condobloke 's suggestion.

THOUGHTS FOR JANUARY 2021 1. COVID SUX -Stay safe and observe the rules 2. ON AV - nothing is bulletproof, but i wear kevlar - i use linux. 3. Still Beer o'clock where I live . Come and have a sing-along at Rock Roxx
E

Writing this from a successful hard disk install of Debian. It was substantially less trouble than I expected.

Downloaded the Debian Live Cinnamon ISO. Used win32diskimager as described here https://www.debian.org/CD/faq/index.en.html#write-usb to burn to a USB stick. Tried to boot from USB: Hardware issues; drivers missing. I decided I probably should use the one with non-free drivers.

Downloaded Debian Live Cinnamon ISO with non-free drivers. Found USB stick is no longer recognizable by computer. win32diskimager must have done something. I didn't want to keep ruining USB sticks.

Booted from non-free Debian Live DVD. Booted properly to desktop; was able to establish wireless network connection; was able to see files on old Windows HD in computer (whose data had already been copied to external USB mass storage drives.)

Removed old Windows HD, installed new RAM, installed new 2TB internal SDD HD, booted successfully to desktop with Debian Live non-free ISO. There's only rack space for one drive in this machine, and I didn't want to fiddle with installing more. I have an external USB adapter to read IDE and SATA drives of all sizes. I planned to use it to connect a drive identical to the HD I just installed to use for Timeshift backup.

Read a bit about installing in The Debian Administrator's Handbook. Decided since I'm a new user, have a fairly large HDD, and nobody else will be using this desktop, to install everything into one partition with guided install. Looked at LVM information in manual too, and encryption information. Looked at APT information; manual suggested installer would go online and find updates to everything during install. I've used an OS/2 version of LVM so I understand the concepts; I don't think I need that functionality on a standalone desktop. I would like the disk and swap encrypted.

Went to desktop and clicked Install icon. I walked through it. I thought the manual implied I'd be offered a chance to encrypt, but I wasn't. I wasn't offered the chance to connect to the network and update. I did the install, and rebooted.

I configured the wireless network, and here I am.

*
Edit: I started reading the administrator's manual... and the only thing I still wonder about is encrypting.

To encrypt, do I need to go read the admin manual, or is this somewhere in the settings? Does disk encrypt only work with LVM?

Encryption should have been done during the installation. You can do it after the installation, but it ain't pretty - or easy. And, no... You should be able to encrypt 'regular' partitions just fine.

The good news is that it's not all that hard to install and a few more installations will have you doing it much more easily. I pretty much always remind people to not get too attached to your first installation. You'll be installing it a few more times. Trust me...
Hey, how long have you been using Linux? Please see the poll (and vote) at this link.
Learn how to ask a good support question.
I have decided to offer inexpensive Linux-based web hosting.
You must log in or register to reply here.
Share:
Facebook Twitter Reddit Pinterest Tumblr WhatsApp Email Link
$100 Digital Ocean Credit
Get a free VM to test out Linux!