Most of your interaction with other computers will be with your browser. Right behind the user, the browser is one of the weakest points in your security tool-chain.

This requires dedication. There is a learning curve. You will probably get frustrated. 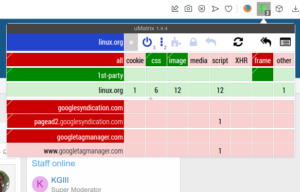 Review: It Appears That uMatrix Is Back Under Development • Linux Tips

This article is a bit of a review of some software called 'uMatrix. uMatrix is an impressive piece of software - browser extension.

Feedback is pretty sweet, even if I don't act on all of it.
We actually have some rules.
Hey, how long have you been using Linux? Please see the poll (and vote) at this link.
Learn how to ask a good support question (UPDATED!)
I have decided to offer inexpensive Linux-based web hosting.

Thanks KGill for the heads-up on umatrix. It looks like a great program. It occurs to me that the distinction between privacy and security, whilst clear in some respects, can be quite blurry. In the past I was interested in avoiding a lot of pesky ads so I used the /etc/hosts file to neutralise the websites that were sending them. I often used the listing at http://someonewhocares.org/hosts/, entered it in my hosts file and made a few adjustments which eliminated a very high percentage of ads with their associated trackers. I regarded that as a matter of privacy rather than security. I didn't feel threatened by any ads or tracking. Unfortunately, ads now appear in different ways on websites, built-in to the site itself so the hosts file, while still effective to some degree, is not as effective as it was some years ago. I don't feel insecure in linux and never have. The last security issue I had was in about 1998 with a version of MS where a virus entered my machine and I was asked to go to a website to pay to have the virus removed. I had opened an email which then sprayed the screen with a colourful display of fireworks, with the message of where to pay. I was able to access a website on another machine at the time which had the instructions to get rid of the virus, which worked. I guess these experiences have influenced me into differentiating privacy and security. Nevertheless it's clear that inattention to privacy can lead to insecurity, for example, exposing real names, email addresses, birthdates, passwords etc online can invite security breaches. That's certainly where privacy and security meet. Fortunately the defaults on the linux installations that I've used have been sufficient to prevent security attacks and I keep the ssh passphrases and authentications secure. That all said, umatrix is very impressive.

For the truly paranoid take a look at:
Linux Hardening Guide Privacy and security are two different things, but the overlap is huge.

Man... I want to configure uMatrix again. The web was so much better with it.


craigevil said:
For the slightly less paranoid:
Click to expand...

The great thing about uMatrix is that you can decide an overall policy and then a per-site policy. It's able to be refined.
We actually have some rules.
Hey, how long have you been using Linux? Please see the poll (and vote) at this link.
Learn how to ask a good support question (UPDATED!)
I have decided to offer inexpensive Linux-based web hosting.
You must log in or register to reply here.
Share:
Facebook Twitter Reddit Pinterest Tumblr WhatsApp Email Share Link
$100 Digital Ocean Credit
Get a free VM to test out Linux!