Hi
I have a problem with my laptop battery under Linux - can anyone advise what to do?

Actually there are two laptops that both display the same problem (both Lenovo G505s). I'll keep the story as short as possible:

My laptop (G505s AMD A10 processor, purchased with Windows pre-installed): after some months of not being used, and having changed by broadband router to a fibre optic one, Windows decided to lock me out. So I thought: I've had enough of this, time to switch to Linux. Did some research and settled on POP! OS.

Being worried about the data on my hard drive, I thought I'd try it out on my daughter's unused Lenovo G505s with slightly less powerful processor (it just says "A series" on the label on the machine). Prepared POP! OS media and installed, overwriting the hard disk in its entirety (no more Windows!) I noticed that although POP! OS worked fine, and I liked it, the battery wouldn't charge. The charging light on the machine was on, but it never seemed to charge and certainly could not power the machine without mains. I thought this might have been due to age of the machine/battery and fact that it had been sitting unused for a long time. I thought I would go ahead and sort my A10 machine out.

After installing on my A10 laptop (a slightly later version of POP! OS, as it had changed in meantime), all was well but the battery was showing the same behaviour; not charging. So it seemed to be a common thing among the two laptops.

I bought a new battery from Amazon not a Lenovo one but one from DTK, thinking my own machine had had quite a long period of unuse. Exactly the same; the battery will not charge.

I've tried a number of solutions found on the net/YouTube, such as removing and replacing the battery when connected to mains, leaving it on for 24 or 48 hours and so forth. Many of these solutions were proposed in relation to Acer machines. None of them worked.

Now I am thinking that Windows (or Lenovo in order to work only with Windows) must have done something in the BIOS to 'confuse' other operating systems. I have dug through the BIOS to see what battery options are there (none), and dug through the POP Settings, but to no avail. The laptop was billed as a Windows machine, maybe it's just not compatible with POP or Linux?

Any suggestions (apart from go back to Windows)?

Very annoying experience. The only thing that comes to mind is: if there is a setting in the BIOS to change to "legacy" operating systems, or something other than "Windows" in one of the menu items, then that option should be chosen for a linux installation. Dunno if that will be useful with the battery issue, but I'd do it anyway if possible, and then possibly re-install linux.
OP
T

Hi Osprey, thanks for your suggestion. I had another look through the BIOS, nothing in there about the battery. Tried changing some of the other options in there (already set to 'other operating system' so changed it back to 'Windows 98') but it's the same.

Sad really, I can't endorse or use Linux as it seems to have a serious defect - at least on my machine. I guess I will have to go back to Windows at some point - at least the battery will work.

I may try the reinstall Linux but if that doesn't fix it, I'm off!

Normally the charging cycle of the laptop has nothing to do with which OS you are using, this is controlled by the onboard Bios instructions.
Lenovo G5** series laptops are renowned for charging problems most common causes are, dead battery, faulty charger or dud on board charging port


English Community-Lenovo Community
When asking for help
Please state the make and model number of your machine or its specification [some problems may be equipment specific]
Please tell us which distribution and build number you are having problems with [example Ubuntu 18.1]
Explain what your problem is and what [if anything] you have tried to remedy it yourself

The idea that Bill Gates has appeared like a knight in shining armour to lead all customers out of a mire of technological chaos neatly ignores the fact that it was he, by peddling second-rate technology, who led them into it in the first place
Douglas Adams [1995]
OP
T

Thanks Brickwizard. I believe you although if I remember correctly, Windows offered some different charging 'strategies' such as charge to half capacity if you used it on mains a lot, so there must have been a way for the OS to interact with the charging regime of the BIOS. I can easily believe that Lenovo G5 series cause a lot of people a lot of headaches with charging (as well as keyboard keys stopping working). Certainly the last Lenovo machine I will ever buy.

I'd willingly 'tinker' (probably restricted to 'inspecting', at least initially) any API interactions with the BIOS as far as battery management goes, but I don't have a clue where to start. I'm thinking to use CodeBlocks and C, and read up on API calls. I'd probably run into a lack of data on what the BIOS reports mean, no doubt proprietary to Lenovo.
K 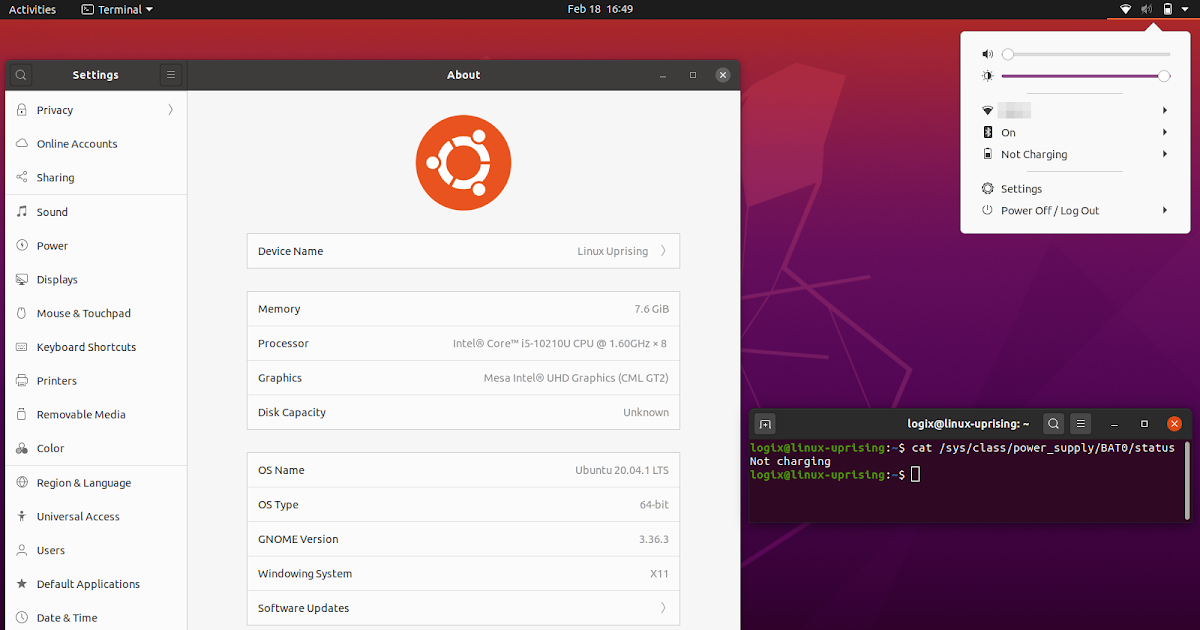 This article explains how to set a battery charge threshold for ASUS laptops on Linux, to help prolong battery life.

It mentions ASUS a lot, probably for SEO. Scroll down and you'll see that Lenovo also supports it.

You can also probably install TLP and just use the defaults, that seems to be what most folks ultimately decide to do.
We actually have some rules.
Hey, how long have you been using Linux? Please see the poll (and vote) at this link.
Learn how to ask a good support question (UPDATED!)
I have decided to offer inexpensive Linux-based web hosting.
You must log in or register to reply here.
Share:
Facebook Twitter Reddit Pinterest Tumblr WhatsApp Email Share Link
$100 Digital Ocean Credit
Get a free VM to test out Linux!