SteamOS Beta - Part 1 : Getting and Installing

Valve brought on a heavy load in customizing Debian Wheezy (7.1) to create their own distro. Their vision with this was to create a centralized gaming center that would house everyone’s Steam games and people would be able to share them across their home. While currently it only works with Linux games, they aren’t leaving Windows behind.

This tutorial series will cover the SteamOS and all of its gaming fun. The screenshots will be provided via VirtualBox (apparently in 4.0+ you can take screenshots AND record video? Its been way too long for me), so the quality should be pretty up there.

Prerequisites
Not a fan of this, but since its a distro I’m not familiar with, I’m going into this as blind as you probably are. I have some ideas what to expect as I’ve seen prior screenshots, but for the most part you’ll be learning along with me.

With that said, if something doesn’t work for you please feel free to still post about it. One distro is virtually the same as another.

What We Need
I started out by having to make the ISO myself. However, I discovered after the fact there’s an ISO pre-made that Steam’s download page doesn’t like to disclose. This can be found at http://repo.steampowered.com/download/SteamOSDVD.iso (I highly recommend this instead of making one yourself as you then have to do some weird jinjitsu work to boot).

If you’re not wanting to install this on an actual machine, you will also need VirtualBox (any other virtualization software is untested by me). I’m using 4.3.6 for this but I don’t see there being any issues as long as its 4.0 or higher.

When creating your virtual machine, its advisable to allocate half your memory (for me its 4GB) to it. If you want to REALLY use the OS for its intentions, I’d recommend installing it on a physical machine. But, for this, it will be fine. Also, set the video memory to 128MB and enable 3D acceleration. It helps. Lastly, enable EFI mode, or else the ISO won’t boot from previous experiences.

Getting Started - Booting Up With the ISO and Installing
So you have the ISO downloaded and attached to your virtual machine, now what? Boot up!

You’ll come up with a screen that looks like this: 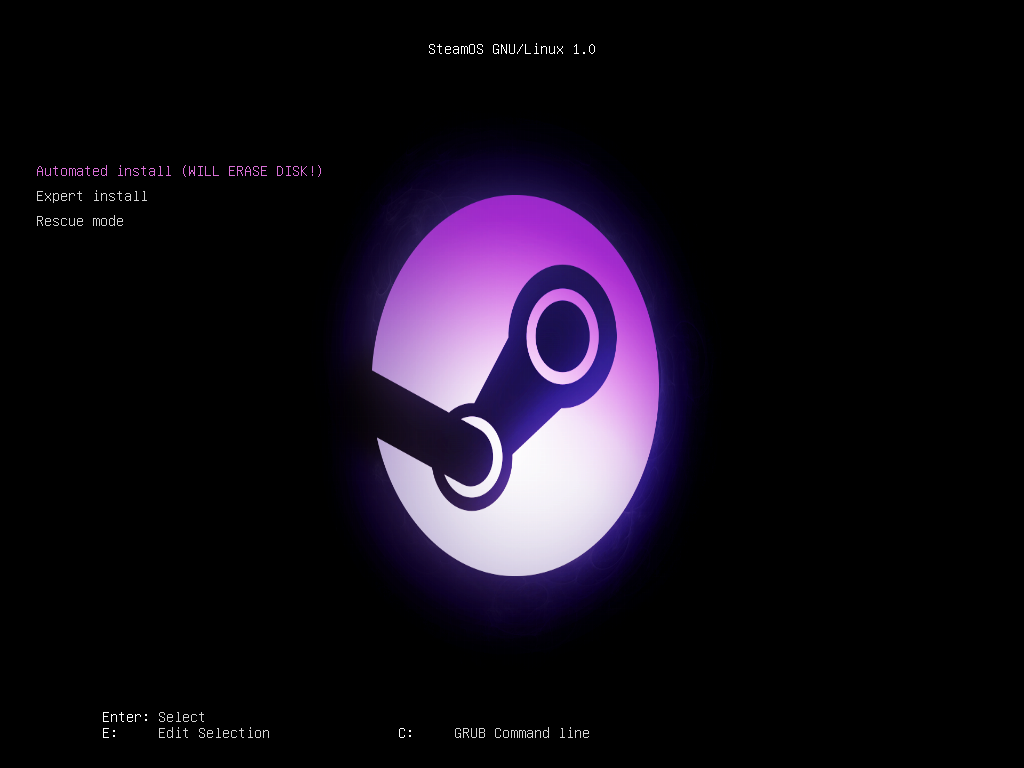 Choose “Automated install”. SteamOS is intended to be the only OS placed (think of it as a media hub of sorts). If you want to try the expert install I wouldn’t mind some feedback on it. Though, its most likely the interactive installer instead of doing everything for you.

This will do everything for you, so you won’t have to click through a billion menus and such.

It took me a good 20 minutes or so with the automated install.

Fresh Install - Booting Up Again (follow if you’re doing this in VirtualBox only)
Now that we have the OS installed, you’ll be presented with this screen: 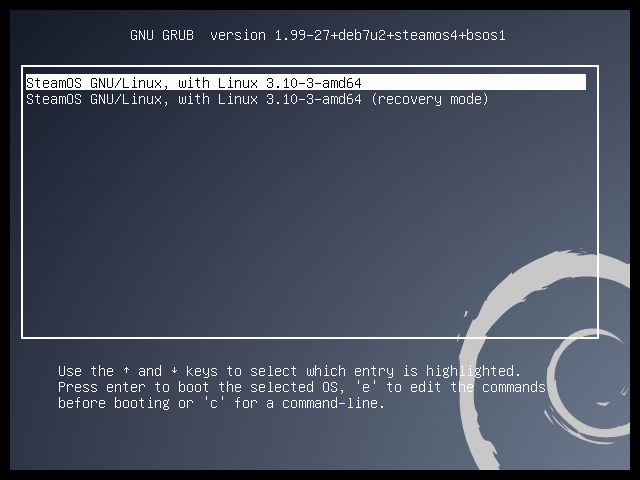 Pretty cool, huh? Well, we still have something else to do.

I wish I knew why Valve figured it was good to assume everyone uses nVidia, but if you boot up right away then your system will hang. Instead, at the boot menu we need to go into rescue mode, purge the nVidia drivers and install the VirtualBox additions.

Once you’re in rescue mode (terminal/command prompt), enter this: 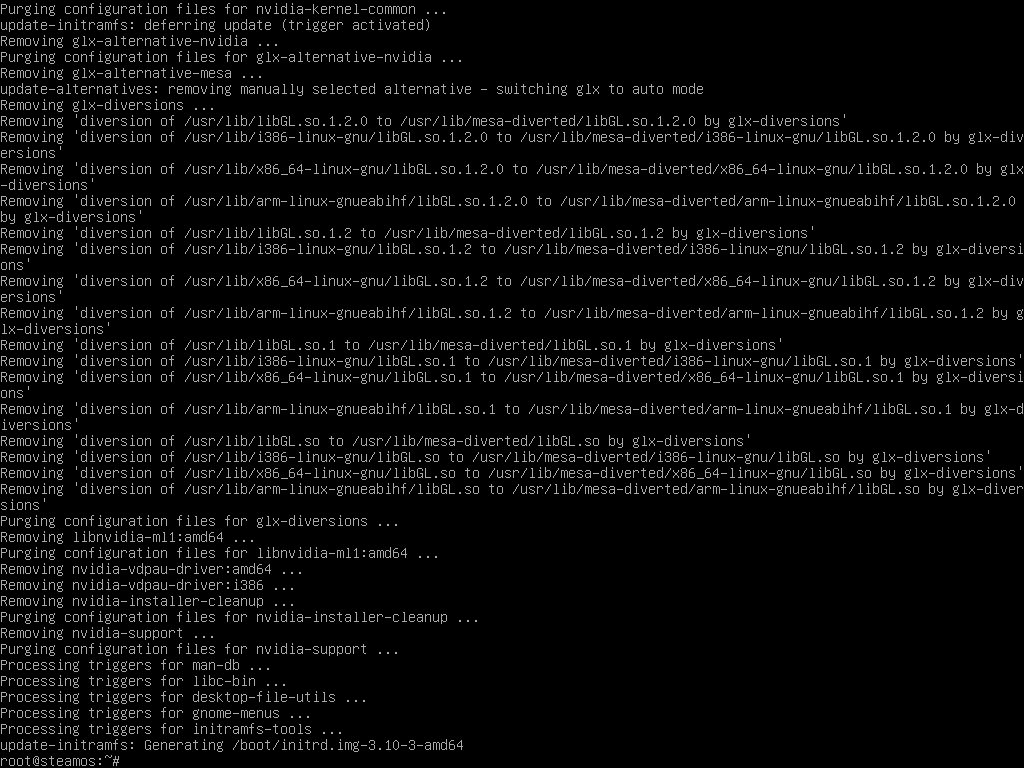 Next, reconfigure the X server:

Code:
Nothing will output, as it just writes new configuration files to /etc/X11. 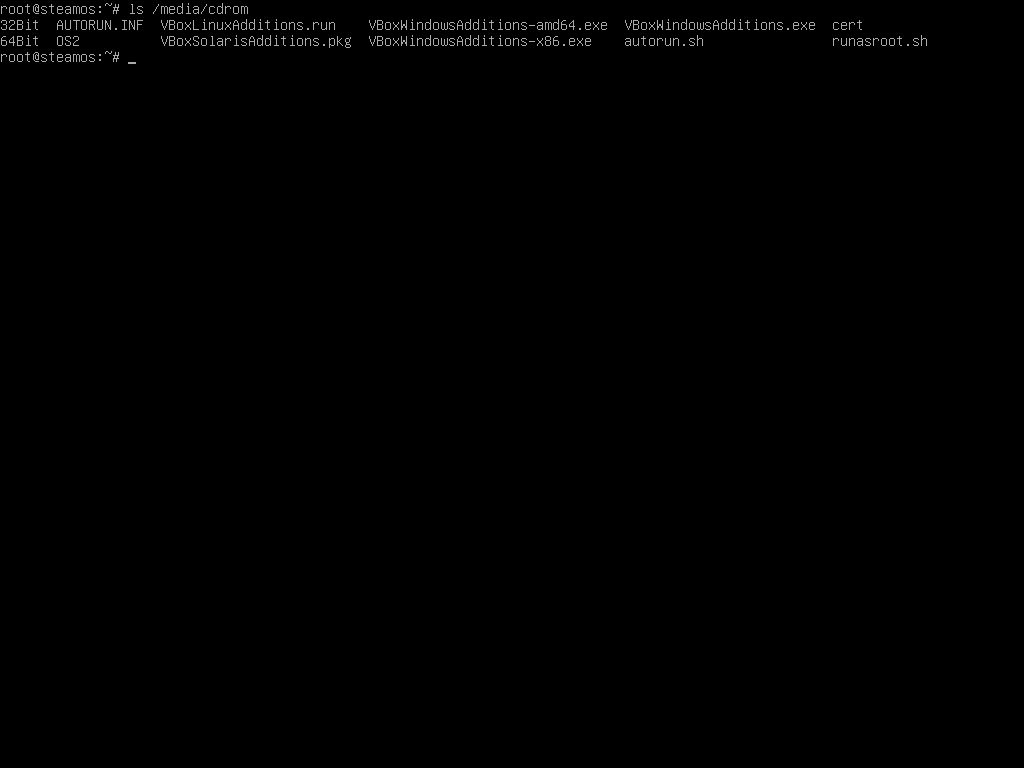 Now to install the additions:

Code:
The end result should produce this:

Reboot again by typing the “reboot” command and choose the first item in GRUB.

Our First Graphical Boot!
Regardless if the way you’re installing, you should now be presented with a Gnome 3 environment and Steam updating. I did have a screenshot for this but for some reason it black screened.

After This
Currently, I'm not having much luck in getting it to boot up again properly.

What happens for me is that if it does boot past the UEFI loader, it flashes the boot logo then goes to a black screen. However, I'm not sure if this is my own doing or what.

Let me know if you had better experiences with this, and I'll be trying to fix this issue on my end as well.

The issue you are now having is due to the graphics drivers. SteamOS only supports Intel and Nvidia graphics at the moment and any other graphics, which includes Virtualbox, are not usable.
E

ryanvade said:
The issue you are now having is due to the graphics drivers. SteamOS only supports Intel and Nvidia graphics at the moment and any other graphics, which includes Virtualbox, are not usable.
Click to expand...

There's people that got it to run in VBox, just it didn't seem to want to work for me. Then again, VBox has changed since the original article was written that I originally followed.
R