On macOS, I use an app called Tiles to re-arrange windows on-the-fly with fast keyboard shortcuts. What is this feature called in Linux and where would I normally enable this? Most of my searches end up with dedicated window managers, but I'm looking for this feature in a desktop environment.

Is there a particular desktop environment that is known for this?

Examples: I'd like to manually arrange windows (with keyboard) to occupy the 1/2, 1/3, 1/4 or 2/3 of the screen. Also send windows to different sides / corners of the screen and finally center if needed.
Last edited: Feb 8, 2022

Tiling window managers are not installed by default, you would have to install and configure it yourself. A very popular one is i3wm but there are many more and I think Gnome3 also has a tiling function in it. 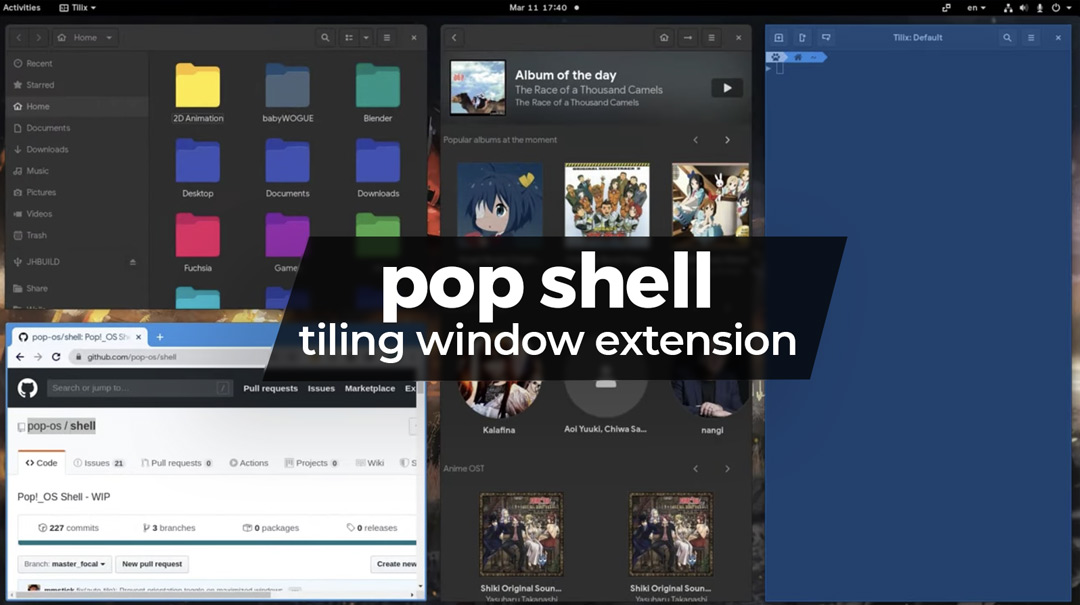 If you love the look of tiling window managers like i3, but don't fancy giving up your creature comforts then keep an eye on Pop Shell — a new GNOME

www.omgubuntu.co.uk
"All things are difficult before they are easy"
"Nothing that is worthwhile is ever easy"

Desktop environments like Gnome, KDE and Enlightenment are traditional desktops which have some very basic tiling functionality built in. Allowing you to tile applications to the left and the right etc.

The arch wiki has a comparison of a bunch of tiling window managers here:

Most tiling window managers just automatically deal with tiling application windows though. Some of them support several different layouts, so you can switch between different layouts/styles with a simple keybind.
And there are simple ways of getting the kind of four-pane layout you want.

i3 and awesome are particularly good. They have a lot of extra features.
Personally though, I prefer dwm. Which is extremely minimalist and literally just deals with tiling windows, it works with multi-monitor setups and can be controlled entirely by the keyboard. Which is all I want it to do. No fancy, flashy extras! It does work with the mouse too. But when I have the ability to do it all from the keyboard, why would I bother with the mouse?! Ha ha!
Last edited: Feb 8, 2022
M

The best windows tiling i have seen is in Pop_OS. But you can only install it on gnome based environment. It works with Gnome shell 3.38 and above. It automatically resize and repositions new windows in a nice way. If you want to try or install that, you should search for pop os shell.
I love Linux! Sometimes i write here DinoTechno
You must log in or register to reply here.
Share:
Facebook Twitter Reddit Pinterest Tumblr WhatsApp Email Share Link
$100 Digital Ocean Credit
Get a free VM to test out Linux!